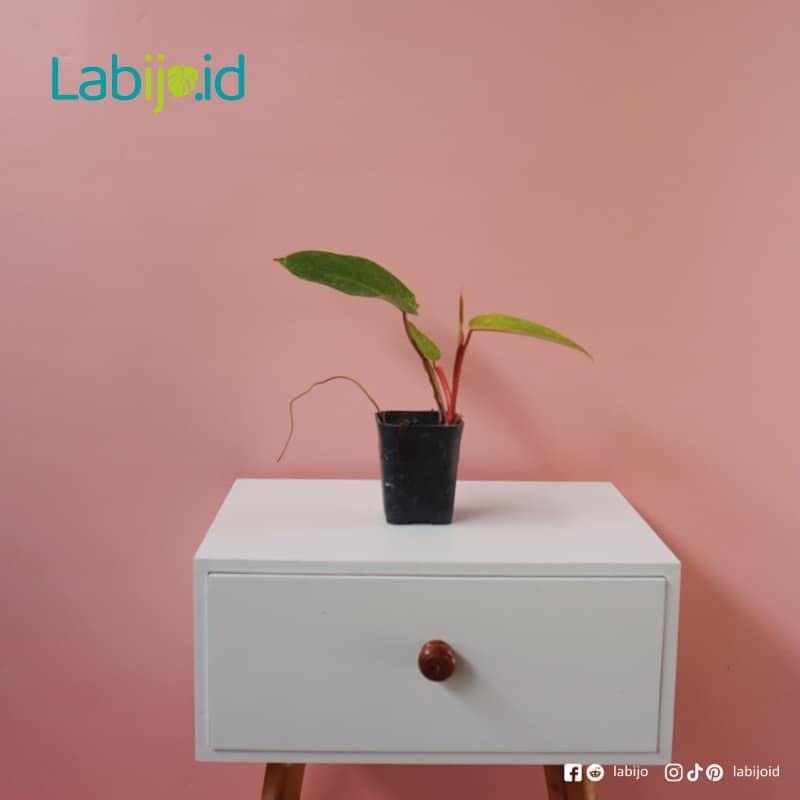 Philodendron is a large genus of flowering plants in the family Araceae. Most people know Philodendron as indoor ornamental plants, but there are many species that are still unheard of. Kaylee Ellen, who is a plant-lover that lives in UK, has a list of Rare Index Philodendrom from the uncommon category to the extremely rare category completed with a short introduction for each plant.

Disclaimer : The plant market keeps on changing and developing, so there are a few plants that might not be very rare now, some of them are still rare. This index is made according to the country she lives in, which is UK. There’s always a chance that some plants are rare for some countries, some plants are not.

So here is the list of Rare Index Philodendron which contain 3 categories; Uncommon, Very Rare, and Extremely Rare by Kaylee Ellen.

Tropical plants Philodendron Squamiferum or also known as Red Bristle Philodendron due to red bristle that grows on their leaf stem. This bristle is almost like hairs and it feels soft and fuzzy. The leaves are large, and they look unusual but attractively solid, specifically with their particular lobes.

Birkin is a compact type of plants. The leaves has white veining, the color is almost kind of sketched out on the leaves.

This plant a yellow version of it called Philodendron Bipennifolium Aurea. Basically the leaves start out yellow and change into greenish yellow. It’s mostly known by the shape of the juvenile leaf, but it becomes almost unrecognizable as it matures because the leaf change to a completely different shape. The foliage cut are glorious.

Philodendron Golden Dragon has the shape of leaf which represent the shape of dragon heads. It’s got shiny deep green leaves that later when it grows older, some variegation would happen. The dark green leaf will have golden dust occurring on top of it.

This one is another uncommon philodendron that has some sort of palm-like cross over foliage that is likely unusual for Philodendron species. The leaves come out light green and turn into deep green it grows.

This one is a matte plant according to the color from leaves to stem. The leaves come out as perfect burgundy/ black color, but eventually the get a little bit brighter when the leaves come through. The stems are also matte black.

This philodendron species has long thin leaves, that has pointy lobes/ears. The color of the back of the leaves is bright red.

Jose Buono has massive, padding leaves. This one also has a nice variegation.

The name comes from the dark green almost black leaves. In certain photos, it looks green, but some look black. It all depends on how the light reflect on the plants. The dark green also has a little touch of nice flushed red which blend together perfectly.

Serpens is known for having hairy stems, so this is such a fuzzy plant. The leaves are heart-shaped.

This philodendron change so much over time, it basically start out very velvety in early age. But as it grows older, the velvety completely disappears and the leaves becoming looking glossy. Lupinum also has interesting lobes.

El choco red is not too difficult to get around UK, the plant has dark velvety leaves, with the red-flushed color its back. As you can see from the photo, the caterpillar also come out bright hot pink.

This one has long glossy leaves with light green veining.

Philodendron Sharoniare looks similar with Anthurium Veitchii, the leaves are long. This one looks quite unusual because of the ribbed aspect on the leaves.

As predicted, this plant is going to hit nursery more this year. It’s got nice shaped leaves with lime green variegation on it, looking a lot like Alocasia.

As you can tell from the photo, the names ‘maximum’ comes from its size. This plant has massive leaves which are bigger than people. If you’re looking for off-size type of Philodendron, you might want to pick it up.

This one has messy light green variegation. It’s got big petal-shaped leaves, the petioles are long and slim.

Philodendron Dark Lord  whose leaves emerge as strong burgundy/dark red (almost black) which eventually fade into super dark green with a metallic maroon underside. It has pretty long heart-shaped leaves, and the leaves come off pointy.

No two leaves on this plant are the same, if one leaf comes out, the next one is not going to look the same.

they start out like philodendron milanocirsm, the leaves are around on the top. When they get bigger, they keep the roundness, but go back to long heart shaped, the back is kind of like burgundy.

When Esmeraldense get bigger, they look much more interesting than the younger ones. It’s not the easiest but not difficult to care for.

It looks similar with Philodendron Micans, but it has ears on it.

The leaves are big and they’re heart-shaped, as you can see, the petioles are very fuzzy. And this starts coming into fashion, as many people look for it.

The gorgeous leaves never fail to catch your attention, but unfortunately Patriciae is far from cheap and it’s not easy to find around UK.

People start hunting this Philodendron species. It’s a pretty unusual plants as you can tell from the shapes and lobes, no wonder it’s very rare.

This one is considered the ‘Holy grail’ of Philodendron, it has long ears.

Hello, we are plant shop and nursery from Indonesia.

We provide extensive support for most hours.

Continue Shopping →
Item added to cart.
0 items - $0
Checkout
Join Waitlist We will inform you when the product arrives in stock. Please leave your valid email address below.